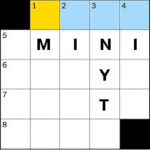 New York Times offers a free daily mini crossword puzzle to all the players which serves as a small cornerstone to it’s biggest Crossword Puzzle. It is meant to be free, and serve as a beginner friendly way to pave your way towards the big crossword, once you’re confident enough.


The mini is a five by five grid puzzle which is meant to be solved in just a few minutes while you’re commuting to work or waiting for someone to show up. It is available both for guests and subscribers of the crossword app.

The Mini Crossword has had a dedicated author since it first began. The main editor of the mini has been Joel Fagliano, a notable cruciverbalist of the Bigger Crossword puzzle. Fagliano has a long history with crosswords, ever since he played one many years ago he became fascinated by them and had a puzzle accepted in Nytimes when he was 18 years old.

He further pursued his passion and managed to work as an intern for the Crossword God, Will Shorts. So basically he never had a different kind of job than being a crossword creator and that is a very good signal for the mini, because it’s lead by a guy who has Crosswords in his DNA.